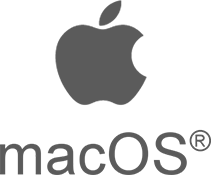 macOS is an operating system that is produced by Apple for its range of desktop and laptop computers. It was first released back in 2001 as a replacement for the Classic Mac OS operating system.

macOS is designed to allow the Apple hardware that it runs on to easily integrate with other Apple devices, such as iPhones, as well as services, such as iCloud, that allows for easy backing up of files.

Included with the operating system are a number of apps, or applications, for everyday tasks, which can be added to from those available in Apple’s own App Store. Many of these apps have similar or the same versions for other Apple devices, such as the iPhone, providing an easier transition between devices.

The Shell is a command language interpreter that executes commands read from a standard input device, such as a keyboard, or from a file. Each command has a number of options, which tailor the output of the command in question. An option follows the command, and is made up of a '-', followed by one or more letters of the alphabet. These shell commands can be run within an application called 'Terminal'.

Vi (Visual editor) is a command line text editor that can be found in the UNIX, Linux and macOS operating systems. This is a glossary of some of the commands found in vi.