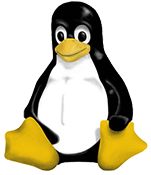 Linux is a free and open source alternative to the Microsoft Windows Operating System, initially developed back in 1991. It has grown in use over the years with it being used in a diverse range of situations including, powering the New York stock exchange and mobile phones, as well as super computers.

What’s with the penguin?

The penguin, or Tux to call him by name, became the mascot of the Linux operating system back in 1996. The concept came from Linus Torvalds, the creator of Linux and was designed by a man called Larry Ewing.

Unlike Windows, where Microsoft is the only organisation that produces the operating system, Linux has many distributions, or distros for short, as they are more commonly known. Each distro is based on the same core software, known as the Linux Kernel. Due to the open source nature of Linux, some distros are based on others, where a person or organisation has taken a distro, made their own enhancements and released it, for example Ubuntu is based on the Debian distro. Below are just a small number of the distros available.

CentOS was first released back in May 2004. It is developed by a small core team, along with its community and is based on Red Hat Enterprise Linux.

Debian is one of the earlier distributions of Linux, which started out back in 1993, with its first stable release in 1996. It is used for personal computers, as well as network servers, and is a popular starting point for other Linux distributions, such as Ubuntu. Debian does not have the backing of a large organisation, but is instead developed by a large community of volunteers over the internet.

Gentoo Linux was first released by Daniel Robbins back in 2002 and is today developed by the Gentoo Foundation, which Daniel founded back in 2004. Gentoo is a highly customisable Linux distribution that allows the creation of very efficient desktops and servers, by giving greater control over what services are installed.

Kali is based on Debian Linux and was first released back in March 2013. It is maintained and funded by Offensive Security, a company that provides information security training, as well as penetration testing services, and is designed to be used for digital forensics and penetration testing.

Linux Mint has been around since 2006, when a beta release of Linux Mint 1.0 was released. The project was started by Clement Lefebvre and today continues to be developed by the Linux Mint team, together with its community. There are a number of different editions, which are either based on Ubuntu or Debian Linux directly.

Oracle Linux, previously known as Oracle Enterprise Linux, is a distribution of Linux from Oracle Corporation, that is free to use. It is based on Red Hat Enterprise Linux and was first released back in 2006. Oracle also provides the "Oracle Linux Support program", which is a paid for service that customers can use to get support with Oracle Linux.

Red Hat Enterprise Linux is developed by Red Hat Inc., a company that specialises in providing open source software to the enterprise community and has been around since 2003. Although it is open source, like other Linux distributions, Red Hat uses strict trademark rules to restrict free re-distribution of its officially supported versions. Red Hat Enterprise Linux is based on Fedora Linux, a distribution developed by the Fedora Project, together with its community and is also sponsored by Red Hat Inc.

Tails is based on Debian Linux and was first released in June 2009. It is a security focused distribution that is aimed at preserving both the privacy and anonymity of its users. All of its outgoing connections are forced to go through Tor, which is software that enables anonymous communication, whilst non-anonymous connections are blocked. It is designed to run directly from a USB device or DVD, without having to be installed, although it is also possible to use on a virtual machine.

Ubuntu is based on the Debian distro and developed by a company called Canonical Ltd, which is based in the Isle of Man and owned by Mark Shuttleworth. Canonical also provides technical support and other Ubuntu related services, which is where their revenue comes from, as Ubuntu itself is free.

Whonix is a security focused Linux distribution, based on Debian, which aims to provide privacy, security and anonymity. It was first released back in February 2012 and is developed by The Tor Project, Inc, a research-education non-profit organisation, based in Massachusetts, USA. Unlike most Linux distributions it is designed to run purely within a virtual machine and is distributed as two separate virtual machine images that are used together, a Workstation image and a Gateway image, that utilises Tor to enable anonymous communication.

The Shell is a command language interpreter that executes commands read from a standard input device, such as a keyboard, or from a file. Each command has a number of options, which tailor the output of the command in question. An option follows the command, and is made up of a '-', followed by one or more letters of the alphabet. These shell commands can be run within an application called 'Terminal'.

Vi (Visual editor) is a command line text editor that can be found in the UNIX, Linux and macOS operating systems. This is a glossary of some of the commands found in vi.